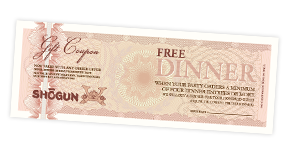 When completed my son received 1 breast with his kids meal and the second breast was shared with myself and the other girl on the table. Also, very disappointed on the size of the filet. I go to Shogun and walk out of there full and bringing food home with me. I left the other night from Benihana and was still hungry. Not sure if there was a mistake or this is the regular portions, definitely not worth the money. Our Chef Andrew was great. Food was rich with flavor. Our server was also excellent. Our server was extra nice as was our chef!

The food was delicious! We had a full table. The chef burned all the onions while doing the volcano trick. Got the shrimp appetizers at the end of the meal. Sound in the restaurant was good, I could actually have a conversation. We had a great time! Kudos to Chef Frank for preparing a delicious meal and he was very funny, too! I enjoy the food at Benihana very much. My poor rating was due to very disorganized staff. My reservation was for 6: We arrived on time and had to wait for a table. Was told 25mins or so.

Once seated we waited a long time for our serve to come. She apologized and promised that everything would come quickly. We ordered drinks and an appetizer along with the teppanyaki. The drinks came but the appetizer never arrived. I had made reservations for 4 on a Sunday for 2 pm lunch time. We arrived checked in and let the front desk know that our party went from 4 to 3 which was not a problem. We got sat down at our table. The waiter took our drinks and came back to take our food order. The waiter was not that great.


She went missing for majority of our lunch. The food had no taste. The stake I had ordered was not cooked they way I had requested. The chef was nice but the food he cooked was not tasty. I have been to the Anaheim and city of industry one and those are way better it was a waste of my time to drive up to Arcadia.

If your looking to have a great time and tasty food I would highly recommend going to the one in the city of industry or Anaheim. The chefs are very friendly and interactive with the guests and the food taste way better. Sad to say I will not be visiting the Arcadia location anymore. Great experience!!!!

Front desk girl super rude! Food portion was smaller than 4 days prior. Cook had a rather flat affect. Appeared bored. Not enthusiastic at all. I showed up at my time 3: So maybe don't come hungry because then you'll be cranky too. This is the best Teppan table restaurant in the SGV. Service and quality are very good. Kids menu is generous and has plenty of choices. Very disappointing as we came for my sons birthday and had something to get to checked in at 4: They made us wait half an hour even with a reservation!

Very good service and we were seated just a few minutes after our reservation.

My daughter had a coupon for a free mug and the server asked which one she wanted. She asked for the cat mug. After we left we realized we never received the mug. Unfortunately we do not have the time to return and get another. Great food, good atmosphere. Chefs are very skilled in what they do. Celebrating a birthday. I was a little upset when I arrived and I was asked if I had reservations. I said no and I was told that the next available table was at 6 pm. I went outside and had to go on line and book a table. This was very upsetting to me because the party of 4.

Adults and 3 children where celebrating a birthday. Once I book the table on line I came back in and I was accommodated. Other then that I have nothing else negative to say.

Our waiter took forever to serve us, took him 45 minutes just to give us our check and another 25 to give us our receipt, very poor service. We were sat an hour after our reservation. The bar tender was one of the rudest human beings I have ever encountered. Instead of actually asking anyone at they bar if they needed anything, he yelled at all of us saying "Nobody is talking to me! The waiter was once of the most sarcastic and inappropriate people I have ever met. One of his most egregious acts was when I asked for water, he looked at me and said "hell no".

The restaurant didn't take debit cards. It was just a nightmare experience. Under cooked food, dirty restaurant, and not very good chef. Not a pleasant overall experience. Give us a different chef and would probably enjoyed the evening. Being busy is not an excuse. Restrooms were disgusting and floors were dirty. Support staff were working hard. Even though I made a reservation at 6: Such long wait even though you make a reservation. Other restaurants do better customer service. Our server Brandon seemed like he was completely out of it. He wasn't attentive to our table at all. Even the chef was annoyed with him because he was waiting for him to bring out the rice bowls and he was nowhere to be found.

He chef had to leave the table to go get them himself! THEN, when he brought back my refill, he mixed up cup with the girl sitting across from me. She was drinking Iced Tea, I had Pepsi. I didnt realize he had switched our glasses until the girl told me she noticed because her straw had my lipstick on it!!! That is so unacceptable!!!! When we told him, he couldn't care less. The check he actually gave us was from another table, already signed!!! This guy was ridiculous. Did not pay attention to what he was doing all night, especially to our table.

If we ever go there, I will refuse to have him as our server. All he said was, no one ever called him even though our whole table heard me ask the other server to speak to a manager. Like how RUDE was that? The hostess was horrible. She was moody and rude and not friendly at all.

They took forever to even bring water out and for them to attend us once we were seated. The wait time was ridiculous. Horrible visit. First table sat on super dirty, cold soup, forgot kids meals app. To name a few things that went wrong. Food was flavorful and tasty, but most importantly there was no show. Had to ask for a volcano and light show that was poorly done.

That was the extent of our enertainment. I cone to this location often. This by far has been the worst ever. I ordered the Hibachi Supreme for 2 consecutive New Years Eve dinners with family at the same location. On both occasions, my steak not so-inexpensive Chateaubriand was overcooked. When I pay that amount for a petite steak, I expect it to be more accurately prepared. I ordered medium rare and got something closer to medium to well-done. And no drawn or melted butter for the lobster? Afterward, he shaped the rice into a heart and turned on the grill so that the heart was red and was "beating.

I was envious because I saw one of the other chefs take a bowl of fried rice and place it on his spatula, he flipped it in the air and caught it again on his spatula. Our chef merely scooped our rice into bowls and placed it in front of us. Then came the "secret sauces. Here's our meat and veggies cooking on the teppan grill. Actually, it was the whole table's order so half of that belonged to two other couples. One of their signature moves is making a little "volcano" and "choo choo train" out of onions. And here he is slicing and dicing our meats.

This is actually just one order of the seafood combo, split among two plates since my brother and I were sharing. And yes, we did pick at cousin Q's filet mignon, but it wasn't a very big piece to begin with. So while the food was good because it's hard to mess up with a nice hot griddle , the show wasn't as spectacular as I was expecting. I think it really depends on who you get as a chef and how much they want to interact with the table. And I think they definitely perform more for a group of women and children, who are more likely to ooh and aah at their antics. 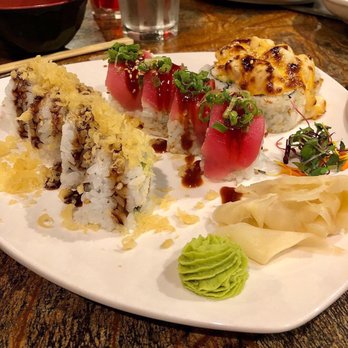 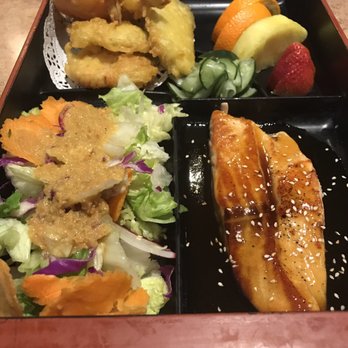 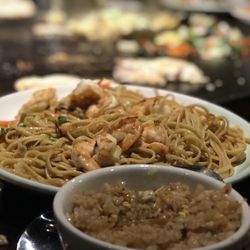 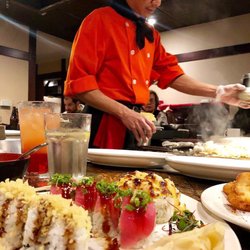 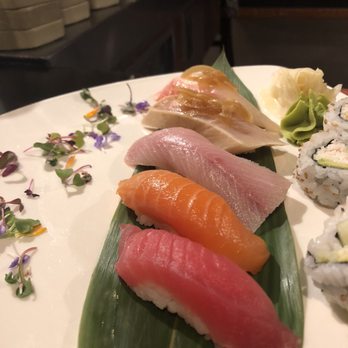